The Many Flags We Fly: Long May They Wave 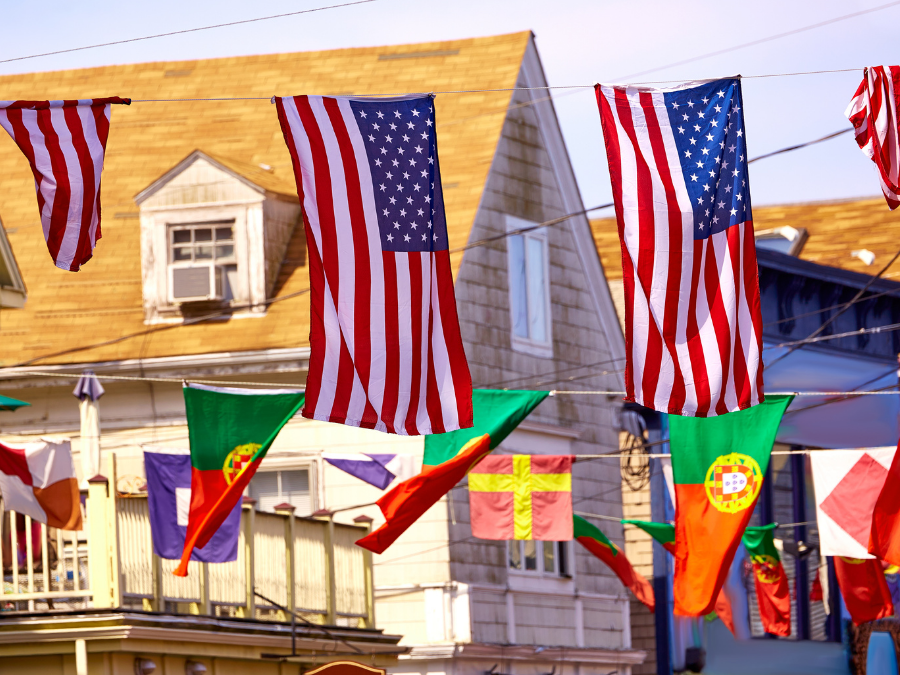 At a time when our nation is struggling with divisiveness and conflict, the Pilgrim Monument stands tall as a beacon of inclusivity, tolerance and freedom. The tower represents what makes Provincetown unique: For centuries, our seaside town has been a safe haven for marginalized communities, welcoming “pilgrims” from near and far—regardless of race, religion, ethnicity, sexual orientation or lifestyle. In coming together, these groups have made Provincetown the ultimate melting pot, enriched and invigorated by the diversity of our people.

Each of these groups has a colorful history that makes up the fabric of our beloved town, and we are literally waving the banner to celebrate them. In June, we flew three flags alongside the monument in observance of Pride Month, Juneteenth and the Provincetown Portuguese Festival. In August, we flew the Jamaican Flag, celebrating Jamaican Independence Day. So when residents and visitors look skyward to admire our tower, they will see not only Old Glory but the history of Provincetown fluttering in the breeze. 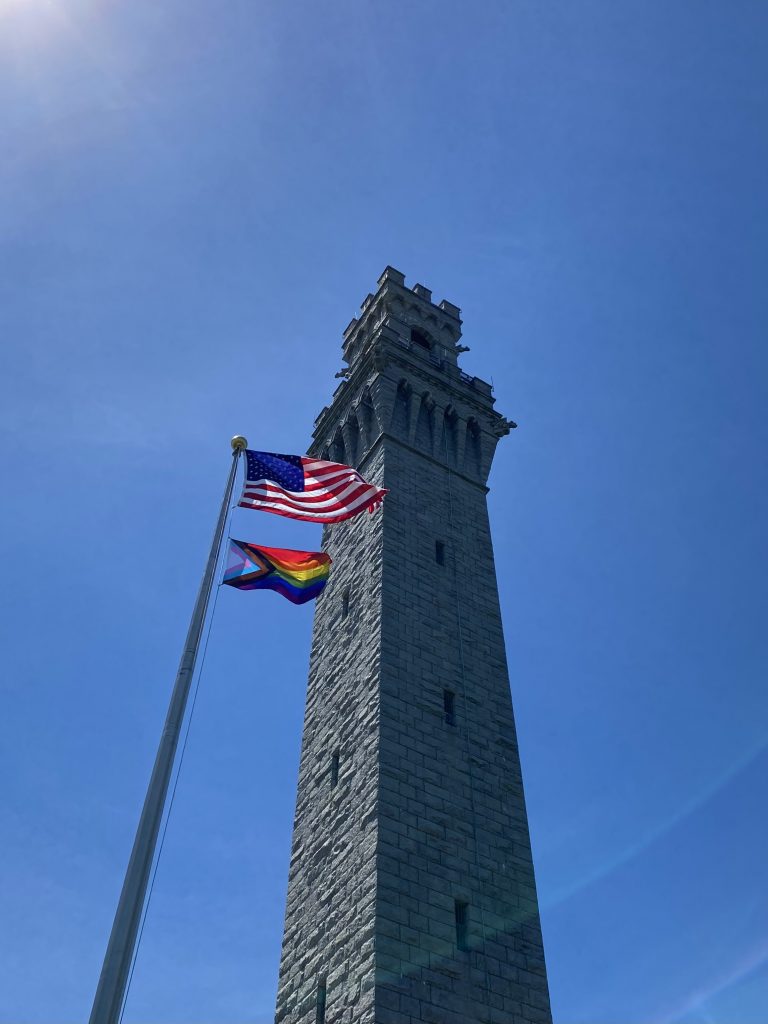 Every June, LGBTQ+ Pride is celebrated around the world. Pride Month, as we call it, commemorates the 1969 Stonewall Uprising that catalyzed the gay rights movement. To show our support, we proudly fly the progressive rainbow pride flag, whose vibrant colors reflect the diversity of the LGBTQ+ community and the spectrum of human sexuality and gender.

Provincetown has been a mecca for the LGBTQ+ community for the past century. Since the Roaring 20s, people have flocked here to find the freedom to live and love as they wish. Among them are many artists and writers, including such luminaries as Tennessee Williams and John Waters, whose creative energies helped establish Provincetown as a cultural destination.

In keeping with our commitment to sharing accurate histories and engaging stories about the people who live here, we partnered with The Generations Project to install a permanent exhibit, “An Anecdotal LGBTQ+ History of the Last Century of Provincetown.” The exhibit showcases two walls of stories—one featuring stories told at the Generation Project’s annual live events in Provincetown, and the other a documentary series called “Remnants: An Excavation of Provincetown.” The goal is to portray Provincetown’s LGBTQ+ history over the past hundred years and to promote acceptance, tolerance and equal rights for all. 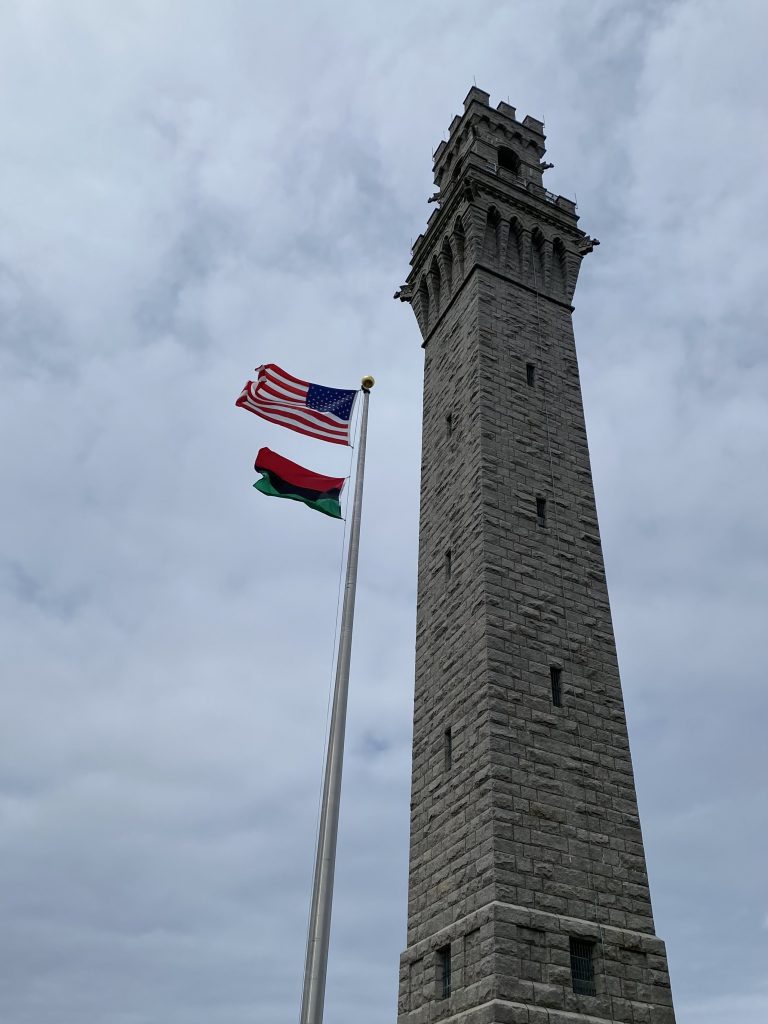 Another flag graced our skies in June: the Pan-African flag, with its vivid red, black and green stripes. We hoisted the flag in honor of Juneteenth, our nation’s second Independence Day. On June 19, 1865, slavery in the United States truly ended when Union troops marched into Texas to enforce the Emancipation Proclamation—more than two years after President Abraham Lincoln issued it on Jan. 1, 1863. More than 250,000 Black people still held in slavery in Texas were finally freed, and that day came to be known as “Juneteenth,” a combination of the words June and nineteenth.

Juneteenth has long been observed by the Black community as a time to celebrate African-American culture and achievement. It slowly became mainstream, and in June 2021, President Biden proclaimed it a national holiday.

The history of the African-American community in Provincetown dates back a few hundred years. Provincetown was reportedly a station on the Underground Railroad, which helped enslaved Blacks escape to Canada. About a century later, Black artists, singers and writers came here to enjoy freedoms they were denied elsewhere. Among them were writer James Baldwin and musical icons such as Eartha Kitt, Ella Fitzgerald and Billie Holiday, among others. 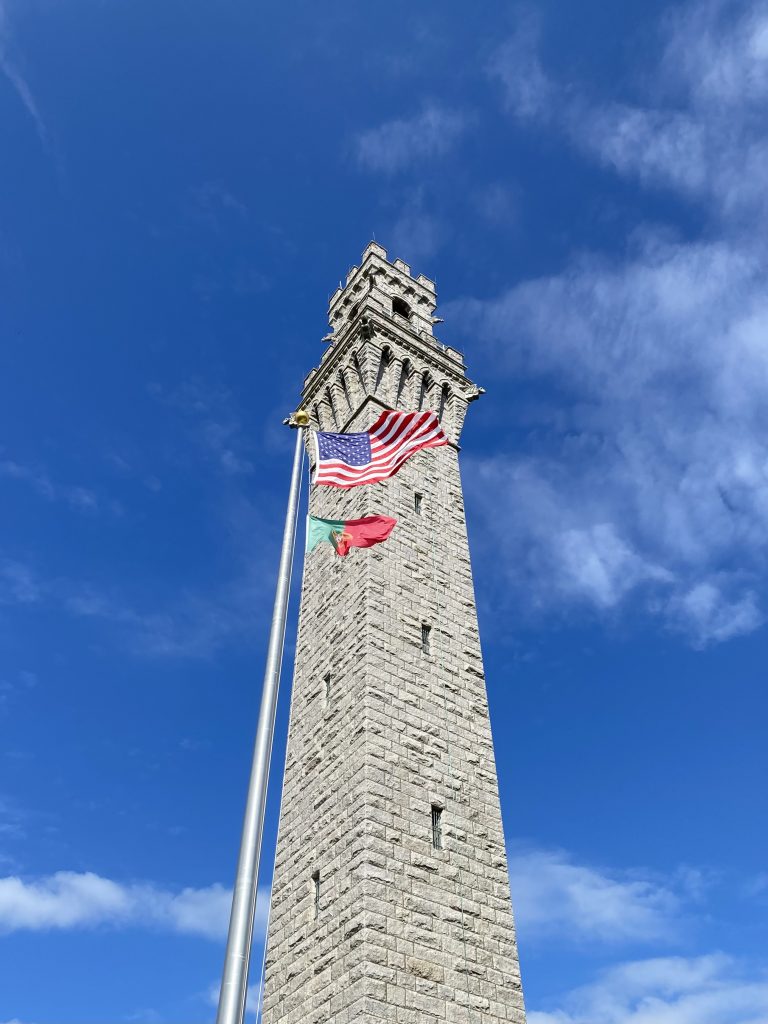 The Portuguese community is an important part of Provincetown, which has a storied seafaring history featuring whaling, piracy and especially fishing. Portuguese immigrants helped establish the fishing industry that was our region’s lifeblood for many years. Their contribution is celebrated every year in the Provincetown Portuguese Festival, which honors Portuguese traditions.

At one time, more than 150 fishing boats—most manned by Portuguese fishermen—made their home in our harbor. In 1947, two Provincetown fishermen visited Gloucester for the annual Blessing of the Fishing Fleet, a ceremony to honor and protect New Englanders who depended on the sea to feed their families and local residents. It has remained a tradition for more than 70 years.

It’s important to note that the Portuguese community was among the first to welcome African-Americans to Provincetown. The Portuguese, some of whom had darker skin, were not welcomed by the Yankees when they first arrived here. Knowing the sting of discrimination, they wanted to help the enslaved Blacks passing through Provincetown on their journey to freedom. 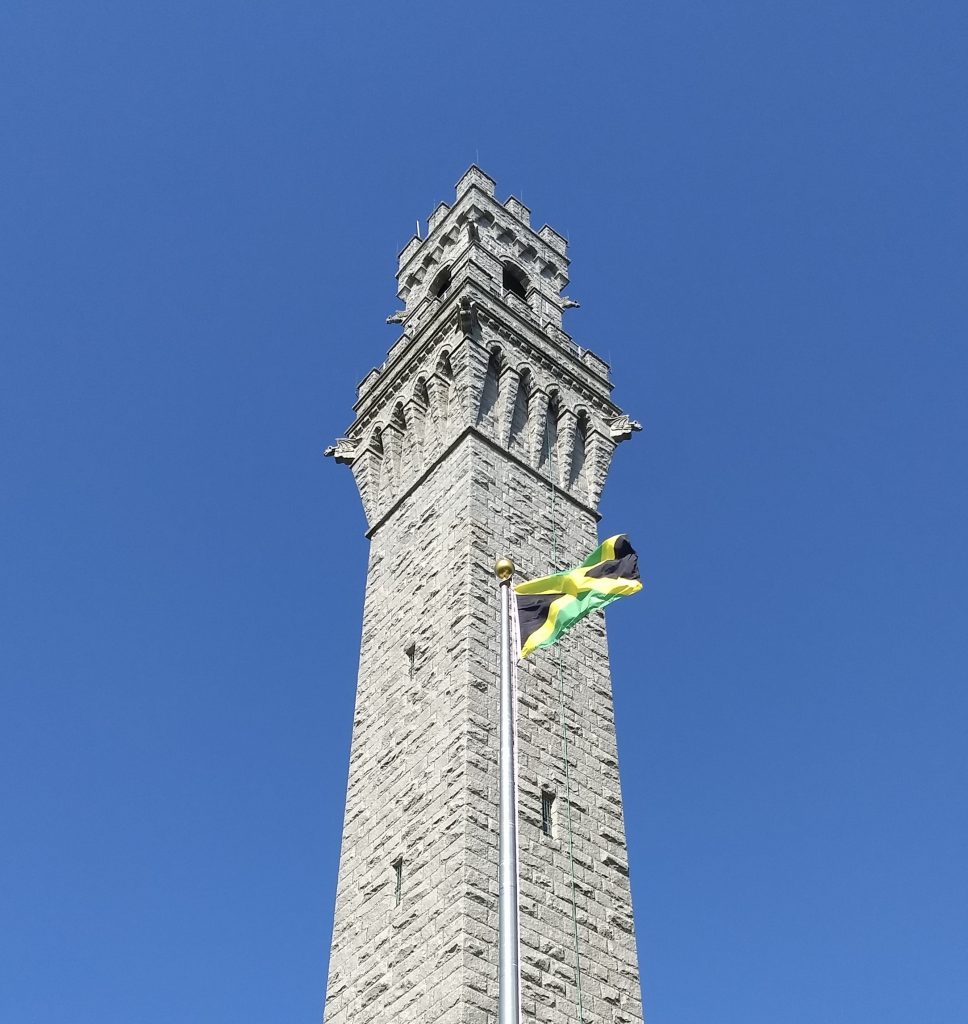 On August 6, Jamaican Independence Day, we flew the Jamaican flag over High Pole Hill. On that date in 1962, the Colony of Jamaica gained its independence from Great Britain.

2021 was the first year in which we flew the Jamaican flag. Initially, people from Jamaica came to Provincetown to support our booming summer season, but over time many have settled in and become year-round residents. We now have several generations of residents with Jamaican heritage that are part of the life-blood of Provincetown.

This is a town that is built upon tourism, and the service industry—food and lodging—is central to our economy. We literally could not survive without our Jamaican brothers and sisters, and so we flew their national flag out of respect and with appreciation for the ways they’ve enriched our community.

Flying these flags is one of the many ways we demonstrate our commitment to welcoming pilgrims of all kinds— including Afro-Caribbean, Jamaicans, Eastern Europeans, Portuguese, gays, straights, transgendered, artists, environmentalists and others. This gesture exemplifies PMPM’s core values and our ongoing mission to foster and promote TRUTH: Tolerance-Respect-Unity-Trust-and Her-His and Their story.

Our mission reflects what Provincetown itself is all about: acceptance and tolerance for any and all who come here. It is our fervent desire to promote those values not only within our community but across our whole nation and globe.