Stories I’ve Heard: A Salute to Black History in Provincetown 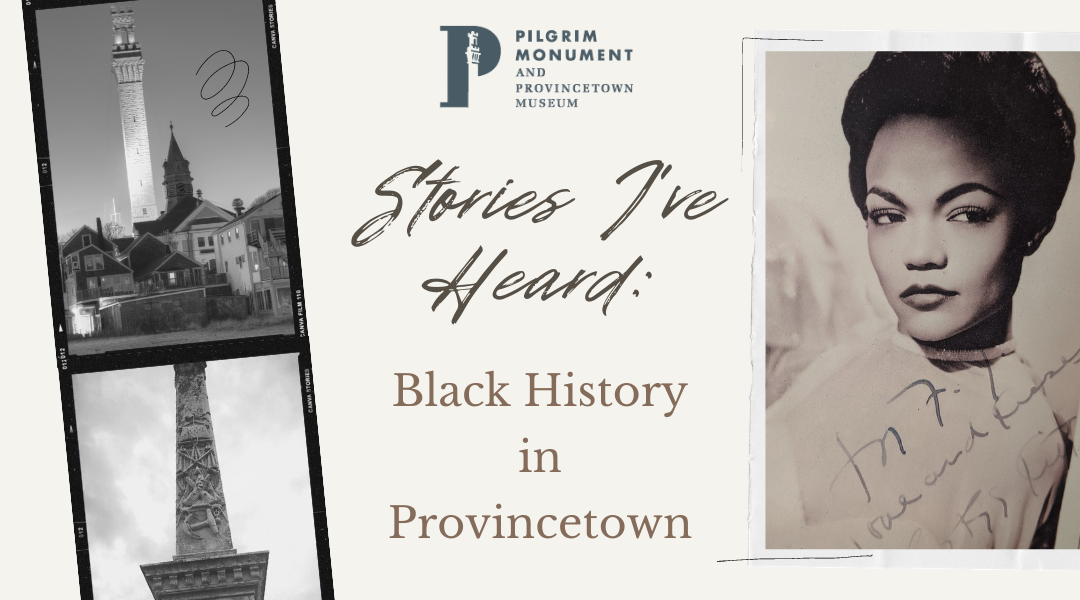 By Courtney Hurst, President, Board of Trustees

In honor of Black Lives Matter, I wanted to share an informal retelling of some of the amazing stories about Provincetown’s rich and prominent role in Black history that I have been told through the years and during this Black History Month. As we all know, even with the best of intentions, stories shift over time and each time they’re retold, especially when they’re not written down. Please keep this notion in mind as you read these stories.

Many of you might be surprised to hear that the Underground Railroad came through Provincetown. There is a plaque at 157 Commercial Street (behind Dougie’s salon, on the building that was “The Martin House Restaurant” for years) that memorializes that spot as a “station” along an Underground Railroad route. You might think, “Why? We’re at the end of the world in Provincetown; we’re so out of the way. Why would this be a point along the way?”

According to a Provincetown native (and local legend) in her 80s, this is what her parents told her about that time: “Provincetown was a passage for Black people coming north to claim their independence. Sometimes, coming by boat was the safest way to avoid places along the land routes that weren’t friendly/helpful to enslaved people, and later, formerly enslaved people. The boats would come ashore at that beach at 157 Commercial. Sometimes, they’d change boats there. Or they’d leave on land from there. Or, sometimes, they’d have to wait and hide until their next transport arrived, which means the people of Provincetown helped hide them – sometimes in cemetery tombs if needed – until they could leave safely.

Fast forward about 100 years: Another group of influential people of color would come through Provincetown and have an impact.

In the 1950s, when my grandmother and grandfather (Halcyone (Cabral) Hurst and Frank Hurst) bought the A-House with my great uncle (Reggie Cabral), it was already a go-to destination for artists, singers and writers like James Baldwin, who would become known as a leading literary voice of both the civil and emerging gay rights movements. While they owned it, they continued to draw some of the biggest musical names to ever perform, including true icons like Eartha Kitt, Ella Fitzgerald and Billie Holiday (who all appeared at the A-House within a month of each other during 1955), among others. It isn’t hard to imagine that those icons and influencers were drawn to Provincetown, and the A-House, because of their acceptance and appreciation for all artists. At the A-House, it didn’t matter if you were white or black, you walked in the front door (or the back door, or wherever you wanted to walk in). Likewise with where you ate. All were treated equally and like family.

The first time Billie Holiday arrived at the A-House, late one night in a cab, my grandfather made her a pork chop sandwich because she was starving; just like he would for his cousin whom he wanted to feel welcome. On another occasion, when she had a sudden craving for a hot dog, she sent my dad to the hot dog stand to get one for her, gave him $100 and told him to keep the change; just like she would a nephew she wanted to spoil.

When Ella Fitzgerald was doing a sound check in the “Big Room” of the A-House one hot afternoon with the windows wide open, she heard my dad and aunt bickering out back. They were taking jabs at each other and, knowing it was a bad word but not knowing how or why, he used the slur. Ella overheard it, came out, sat my dad on her knee and explained to him with grace, kindness and patience why that was a hurtful, awful word; just like she would a younger brother she wanted to teach.

Speaking of Provincetown’s booming summer nights, we have always relied on summer work reinforcement to help us run our businesses in those very busy months.

Beginning in the late 80s/early 1990s, one group who came to help the community and, ultimately, became an integral part of it, are Jamaicans. Some of my fondest memories are of waiting tables at The Surf Club in the mid-90s when the Powell family first arrived and worked there. They are a family from Jamaica, who have been coming in different combinations, each summer, for decades and have helped many local businesses thrive during the tourist season. Eventually, more and more of these families ended up staying in Provincetown year-round, working, living and raising families.

Of all the different groups who have come here as summer help, there has not been a group who’s reinforced not only our summer workforce, but our community – like the Jamaicans who have made Provincetown their home in recent years.

With that in mind, here’s a shoutout to another nonprofit in Provincetown, the Provincetown Film Society, which excels at sharing stories and voices from all walks of life, from all of Provincetown’s diverse community, and far beyond. To pay tribute to the vibrancy of the Jamaican culture and people in Provincetown, they feature a Jamaican Film Festival each year to showcase the outstanding actors, directors and moviemakers coming out of Jamaica.

These are just a few stories, from a few conversations. There is so much more about all of Provincetown’s people that we need to uncover, record and share.

At PMPM, we want to keep telling accurate, compelling stories about Provincetown’s history and its impact on the national narrative. Please consider supporting our efforts by donating so that case by case, exhibit by exhibit and – someday – wing by wing – we can remain committed to telling the stories, and getting them right, of the many people who’ve influenced this small town we all hold so dear.

To learn more about the A-House, it’s incredible history and the legendary talent that made it a point to visit year after year, please read this article in Building Provincetown.