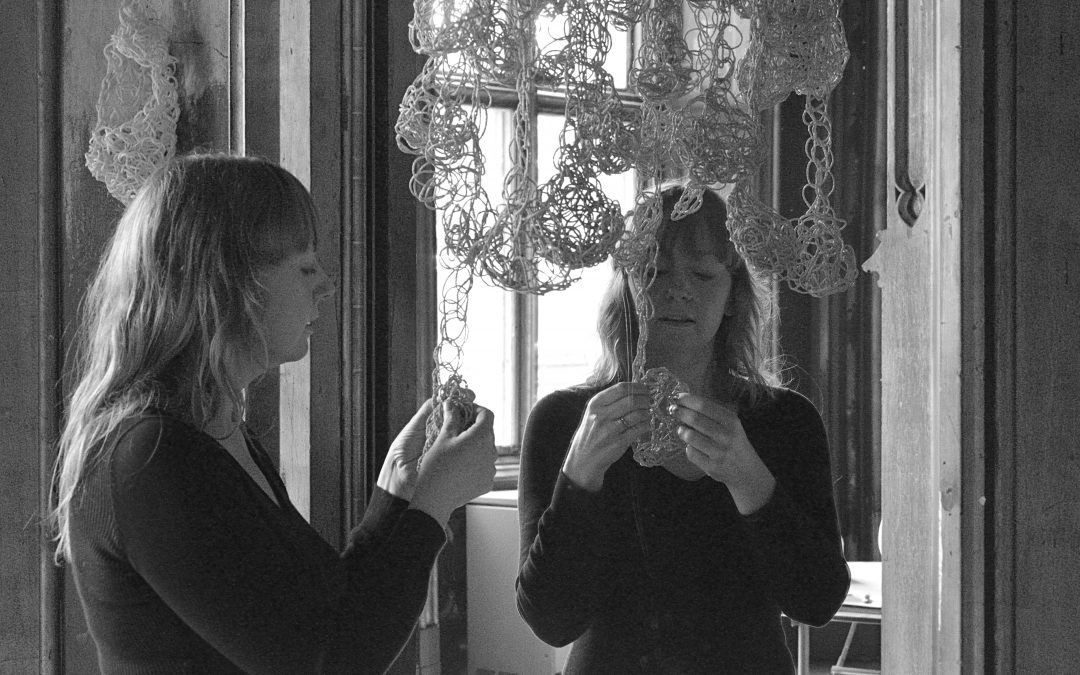 When sculptor Rachel Carter departs Liverpool, England on July 27 via freighter, she will be tracing the Atlantic crossing of the Mayflower Pilgrims while she is working on her project “The Language of Sculpture -Spirit of Mayflower.”  Carter’s journey in the U.S. will end in Provincetown where she will be an Artist-in-Residence at the Pilgrim Monument and Provincetown Museum (PMPM) from August 11th through 25th.

During her 13-day voyage on a freighter, she will be cut off from the outside world and will be charting her journey through a texture diary where she will spend time knotting, stitching and twisting twines and ropes while reading excerpts of William Bradford’s journals he wrote about his Mayflower crossing in 1620. She will also be using ancient weaving methods of macramé to weave new patterns that are inspired by the Wampum belts of the Wampanoag indigenous people.

“I am making my own pilgrimage to get my own sense of feeling and isolation from my family. I wanted to experience what it would be like to be completely cut off from the rest of the world, and express my experience through textile sculpture,” said Carter.

PMPM Executive Director Dr. K. David Weidner, said that this is a once-in-a-lifetime opportunity for the Museum and its visitors. “Rachel Carter’s Artist-in-Residency is unique because it’s a cross-cultural exchange and also an opportunity for visitors to see history in the making.  Rachel’s textile sculpture and expression of her own pilgrimage is an important part of our programming connected to the 400th anniversary of the Mayflower Pilgrims’ first landing in Provincetown,” said Dr. Weidner.   “Rachel’s journey, like present day pilgrims that visit Provincetown for safe-harbor, illustrates spirit and determination. Rachel Carter’s visit to the PMPM supports our inclusive mission of diversity, tolerance, and protecting and promoting our history.”

The ultimate finished product, when she returns to the U.K., will be a 3D sculpture of a female figure outfitted with a Tudor gown with a fitted kirtle and a full skirt adorned with weavings she will have made on her journey in addition to weavings made with 50 women from the Pilgrim roots area of the U.K. The 3D sculpture will be used to cast a bronze statue depicting Pilgrim Women to be exhibited throughout the U.K. during the 400th anniversary of the Mayflower Pilgrims’ voyage to America. The Pilgrim Women sculpture will also feature a woman holding an apple, the Pilgrim 400 apple, a special species being grown in the U.K. for the anniversary and which will also be planted in Provincetown.

“The Pilgrim Women sculpture could really change the way fine arts can reinterpret history and story-telling and incorporate items that may be too delicate to touch. By scanning them and making 3D casts, we can create new sculptures that will withstand exhibitions and displays,” she said.

Carter’s project was inspired by research into her own family history that she can trace to the 1500’s in the Midlands of the U.K. from where several Mayflower Pilgrims were from. She said that her family never moved from that region and were illiterate but could weave complex items as frame work knitters. She relates her family’s roots as weavers with the native Wampanoag people who created weavings that chronicled their milestones and historic events, two distinct groups with no obvious connection but who were similarly experienced in story telling through textiles.

When Carter is in her Artist-in-Residence at the PMPM, she will display the textile art she made on the freighter voyage and talk to Museum visitors about her project. She will also provide Museum visitors with the opportunity to learn how to weave!

Prior to her Provincetown Museum Artist-in-Residence, she will visit the Peabody Museum of Archaeology and Ethnology at Harvard University to see Wampanoag artifacts and other artifacts from the 17th century recently uncovered in Cambridge, Mass. on an archaeological dig.  Her project, “The Language of Sculpture -Spirit of Mayflower” is supported by the Arts Council England.